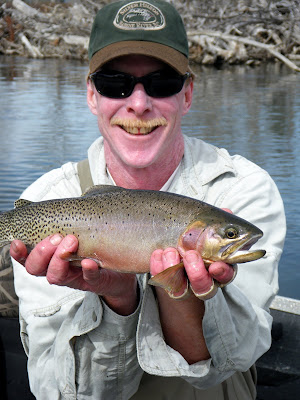 Bitterroot in March 2010 – Jeff Rogers and his bevy of trout

Jack fished with Jeff today. They fished the lower river and in spite of no skwala hatch to speak of there was some VERY good fishing. They caught pike and trout, big pike and trout.

The weather was cold in the morning, but it warmed up to about 66 degrees. There were a lot of boats and wade fishermen out.

To see what Jack and Jeff’s day was like, see the photos below. 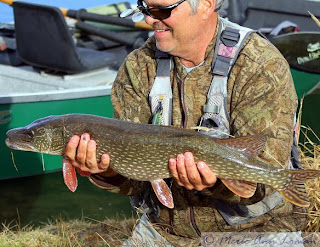 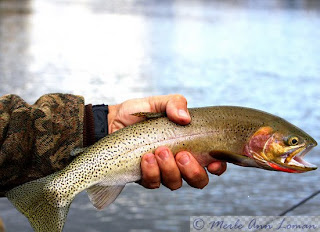 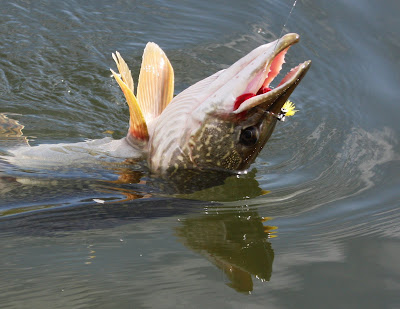 Jack Mauer fishes for a living, but what does he do on his day off? He gets up early and goes fishing for Northern Pike. His favorite spot is a section in the lower Bitterroot (exact location is undisclosed at this writing). For this short but productive float, he has permission to put in on private land and takes out at the next public access point. I get invited along for many reasons: photography, dog handler for our 6 month old Chesapeake puppy, and last but not least, rower of the boat when we get to pike territory.

Northern Pike, or pike, or northerns, are native to Montana but only in the Saskatchewan River drainage on the east side of Glacier Park. They have been illegally introduced in many areas and are now present in every drainage west of the Divide. A highly piscivorous animal, they feed on fish and also eat other vertebrates such as frogs. Northern pike threaten native game and non game fish in the area and popular sport fish like rainbow and brown trout.

With a long skinny head they have large teeth on the side of their mouth, and rows of many small teeth inside their mouth. They don’t chew their food, they just swallow it whole. Characteristics of the pike are: light markings on a darker green body, lower half of the cheek completely scaled; five or fewer pores on each side of the underside of the jaw; and rounded tail tips.

Pike especially like lakes and reservoirs, but on the Bitterroot River they are found in the warmer, slower water. Weeds are used for camouflage while hiding and waiting for food to float or swim by. They tend to live in water which is less than 15 feet deep, near a backwater area and close to shore. A submerged log in about 7 feet of water is another prime hang out spot for Pike. Because the Bitterroot is Jack’s home river, he has located the buckets of water where the pike are and can row directly to them.

When fishing for northerns, it might be a good idea to use a steel leader (a short piece of steel line). The pike’s sharp teeth will cut easily through most fishing regular fishing line. Jack uses an 85 pound test hard monofilament tippet with a very bright streamer that has 2 hooks.

The idea of the streamer is to try to imitate the features of baitfish and minnows, which are what pike naturally feed upon. Since Pike seek their prey by sight, it is important for the streamer to move, so active artificial movement or live bait movement is very important. Anchor the boat above the holding water so you can cast to the bottom end of the bucket and retrieve your line through it and past the pike. Jack fished both deep (with a streamer that sinks and swims) and more on the surface (with a streamer/fly that didn’t sink as well). In both cases, he casts out about 60 feet or more, hopefully beyond the pikes position. Then he retrieves his line with a subtle jerking motion and some pauses in between twitches. The goal is to attract the attention of the pike and make it think his streamer is injured prey. Sometimes after hooking a pike, he saw other pike chasing it to the boat looking for their own meal.

After hooking and reeling in the pike, Jack uses a huge pair of needle nosed pliers to get his streamer and hook out of that nasty looking mouth.

Unlike fishing for trout, you want a bright day to fish for pike. If the water is smooth, meaning not much wind, and the sun is at an angle instead of right above you, you can see this distinctive fish in the water. This might be obvious, but sighting a pike makes it much easier to cast to.

Jack has more time to fish for pike, and in addition on the lower Bitterroot River there is often the opportunity for good trico fishing. It makes for a great day with a wide variety of fishing styles, i.e. fishing a No. 18-20 trico dry fly on 6X tippet versus a larger, flashy streamer with 85 test monofilament tippet and a heavier rod.

Northern Pike are exceptionally good to eat, with firm, white flesh. The bigger fish are easier to bone and except for one troublesome Y-shaped bone, the Pike is relatively easy to filet. You can serve it many ways including grilled, fried, and baked using whatever seasonings and sauces you like. Jack isn’t much of a fish eater but he has a number of friends that like to eat the pike so he gives them away. That is a win/win for the trout in the river and his friends.

This aggressive and voracious fish attacks the lures or flies and puts up a great fight making the catching a thrill. Northern pike can grow to nearly 40 pounds in Montana and provide an outstanding sport and food fish in the appropriate waters. Pike are caught not only for sport but also to help get them out of inappropriate waters. Because of their voracious fish-eating habits they can literally eliminate their food supply in only a few years, leaving a population of terminally-stunted “hammerhandles.” This is why widespread illegal pike introductions in western Montana have become a fishery manager’s nightmare. So, go ahead, get out there, harvest a few pike and help Montana Fish, Wildlife and Parks with removal of unwanted populations!

To see all the photos in a new window, click Jack’s Trico/Pico fishing day.

Montana, Fish Wildlife and Parks Field Guide for Northern Pike and Northern Pike Education Page
I only found a few articles on strategies for pike fishing. Below is a link to an article from Game & Fish Magazine with useful information on pike and how to fish for them.
Northern Pike Strategies by Jim Barta from Michigan – If you are a northern pike fanatic, the author has a few weapons you should consider adding to your arsenal.