Air temperatures were in the 70 degree range beginning about April 20. These photos were taken April 24. Look at the graphs and you can see how the rivers have been rising. The last two days the Bitterroot Valley air temperatures have been over 80 degrees. These photos were taken when Bell Crossing flows were at about 4,700 cubic feet per second (cfs) – 2 pm. Right now it is 6:30 pm and the flows at Bell Crossing are at 5,480 cfs. That is a big jump. The gauge downriver (north) near Missoula measured 8,190 cfs at 8:45 am and now at 6:30 pm it is measuring 9,280 cfs – closing in on 10,000 cfs!!!
The snowpack in the Bitterroot River Basin earlier this month was over 100%. Today it is 89%.
The photos are all taken from Bell Crossing starting upriver looking southwest and rotating counter-clockwise to the east, then south, finally southwest into the parking lot. As I was there, a LOT of large woody debris was moving down the river. 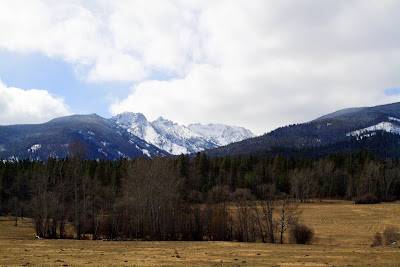 Fresh snow in the Bitterroot Mountains this morning 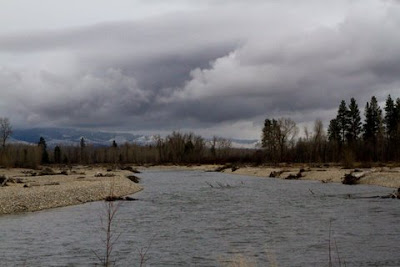 This month has been good for the snowpack. The Bitterroot Mountains have been receiving and storing snow at the higher elevations. There have been some teaser warm days, but the current week (third full week of March) will be cooler in temperatures and more snow is in the forecast. 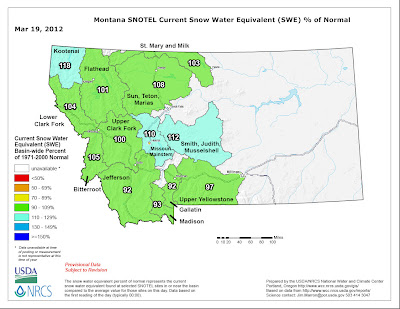 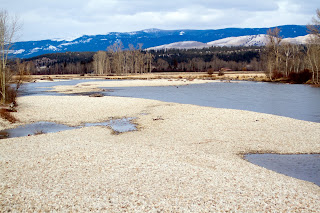 Here are photos of the Bitterroot near Bell Crossing on February 26, 2012. The cubic feet per second (CFS) was about 570. Temperature was in the low 30 degree range. Beautiful day. We like to give the fish a break in the winter while they are struggling to survive the cold, low water but I do like to chronicle the river in photos. Interesting to look back from year to year and compare winter conditions with spring, summer, and fall fishing observations. We love our rivers and all that lives in and on them. It is exciting to watch them as they change through the seasons.
All the river photos are taken from Bell Crossing Bridge looking north. 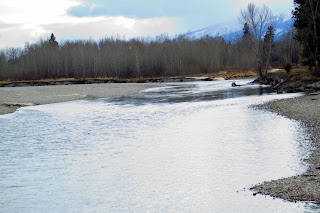 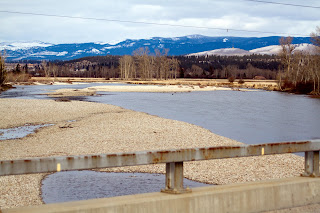 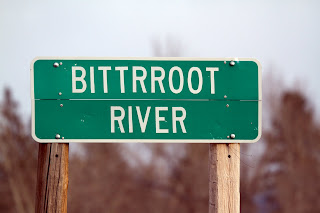 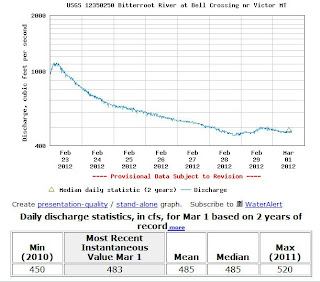 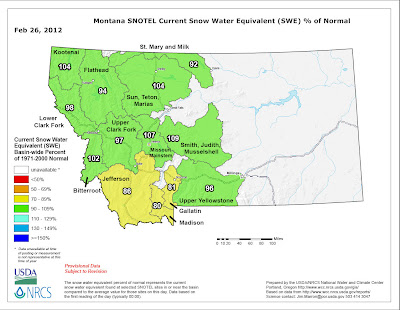 Finally after a pretty dry winter, we are getting more snow. Most of Montana was below 100% snow water equivalent, but that has changed and is forecasted to improve. A wet weather pattern is expected for early March. That is GREAT news for our rivers.Click the image for a larger view. 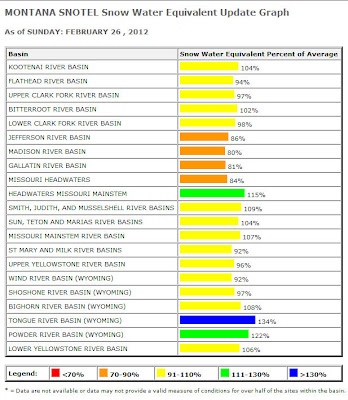 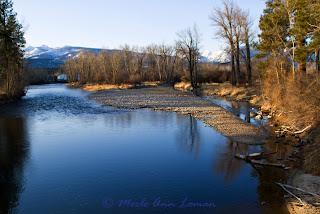 The river looks beautiful. Jack and I were driving home from a great day at Lost Trail Pass ski area. A few days ago the ski area got 8 inches of new snow. The skiing was wonderful. We wanted to see the upper river up close and personal so we drove in to the old bridge just east of Darby, Montana.